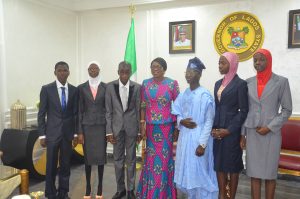 One Day Governor 2016, Master Olaseinde Olufemi and his entourage in a photo with Her Excellency, Mrs. Bolanle Ambode 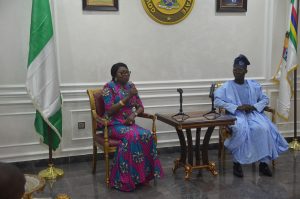 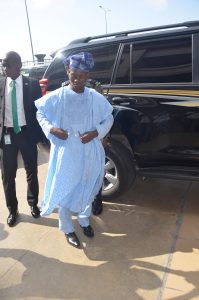 Spelling Bee is an annual competition for public primary and secondary schools in Lagos -Nigeria. The Competition which was initiated by The New Era Foundation commenced in 2001 with the primary objectives of promoting wholesome growth and development of the youth and also to impact on them the Culture of healthy rivalry while raising the standard of education in State.

The annual Competition is categorized as a distinctive one by the participants. Especially the secondary school students, that sees winning of the first position as a key to defining their self-esteem and personality amongst their pairs.

The preliminaries of the Competition hold at each of the 57 Local Government Area (LGA) and Local Council Development Area (LCDA) of the Sate to produce winners who will then represent the various LGA and LCDA at the Grand Finale of the competition which comes up annually in the state.

Prices for the winners ranges from cash prizes N250,000.00 – N100,000.00, an all-expenses paid Students Educational Exchange Programme abroad and the rare opportunity for the overall winner to become ‘One Day Governor’ in Lagos State.

The One Day Governor event remains the most motivating prize for all the 16 winners of the completion since inception in 2001. This according to the students gives them the opportunity to test in reality to feeling of responsibility, accountabilityand theduties aleader is saddled with in overseeing the activity of the state.