Lagos State Governor, Mr Babatunde Fashola (SAN) received the One Day Governor for Year 2011, Mr Iniodu Jones Akpakpan at Lagos House, Ikeja on a courtesy visit, affirming that by his choice as the winner, Lagos has shown aversion to ethnicity, division and religion.

The Governor who spoke during a Special Executive Council Session attended by the One Day Governor and members of his cabinet said the mixed and multi Nigerian assemblage of the cabinet has shown and demonstrated that Lagos will always recognize and promote the very best of Nigerians wherever they choose to live and study on the great island called Lagos. 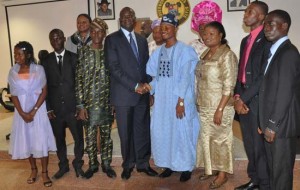 ‘Governor’ Akpakpan Iniodu being congratulated by Babatunde Raji Fashola, SAN, on his ‘assumption of duty’. They are flanked by ‘members of the cabinet’.

He said the persistent call that Lagos deserves a special treatment inNigeria is best amplified by the scenario that has played out in the 2011 Spelling Bee Competition because if Lagos does not prosper it may not be able to offer the opportunities for people to explore their potentials.

He explained that there are many lessons to be learnt from the Spelling Bee Competition as it has prepared young ones to learn to win or lose and stand them in good stead in future, “it enables them deal with difficult situations and know that life could be full of ups and down”.

Governor Fashola who acknowledged the measured but sustained progress already being made in transforming the educational sector in Lagos said it is worthy of note that all winners of the Spelling Bee competition and One Day Governors are products of public schools.

The Lagos State Governor who acknowledged the far sighted and inspirational leadership of former Governor, Asiwaju Bola Ahmed Tinubu and his wife, Senator (Mrs) Oluremi Tinubu  for instituting the Spelling Bee Competition which confer the privilege of being a One Day Governor on the winner.

He described the programme as a well thought out vision which explains why the present administration has sustained the legacy as its contribution to address leadership questions that challenges Nigeria and Africa.

He reiterated that it is the believe of the present administration that when young people are exposed to workings of governments and the dynamics of public organizations it will excite them and challenge them to aspire to be leaders.

Governor Fashola acknowledged the brilliant careers that have become the hallmark of past winners of the Spelling Bee and One Day Governors in various tertiary institutions where they have graduated with outstanding grades and urged the winners to go out and excel to exceed the achievements of past winners.

The Lagos State Governor said part of the incentives which Government has put in place for the best 20 students from the best 20 public schools in the state is a facility tour of all power projects located in Egbin, Marina and Iju to enable them learn the dynamics of power generation because in the foreseeable future, it is their generation that the society will look up to for solution to Nigeria’s power problems.

Governor Fashola added that various projects like rehabilitation of broken schools, classrooms are going on in public schools just as many of the projects are being tended for by the State Universal Basic Education Board (SUBEB) for improvement of the learning environment.

The Governor said all the requests made by the One Day Governor with respect to his school has been noted by the Commissioner for Education and will be addressed along with major actions being taken by the Ministry for all public educational institutions.

He gave a commitment that by the time the students resume for the new academic session and the weather and availability of resources permitting, they will be resuming into new schools and better environments.

He urged Master Akpakpan and his colleagues on the cabinet of One Day to always keep their eyes on the ball, work hard and listen to the counsel of their parents.

Earlier, the One Day Governor, Master Akpakpan had commended the giant strides being recorded by Governor Babatunde Fashola (SAN) since he assumed office, describing him as the best and working Governor in Nigeria.

He added that in the field of education, the Government is providing free textbooks, new schools, new classrooms and the Eko Education project which is a plus for the sector.

The One Day Governor who also spoke on the issue of the environment, beautification and infrastructure said the activities of some citizens have negatively impacted the state and stressed that it is the responsibility of everyone to ensure the sustainability of the environment.

Master Akpapan urged all residents of Lagos to be steadfast and desist from degrading the environment, describing the State as a very liberal State because of the opportunities it has given to him and his colleagues.

the dream of everyone.

He sought the assistance of Governor Fashola in providing his school- Baptist Senior High School with a prototype classroom, a library, a school hall and a school bus.

The Governor later presented a desk top computer and a generator to Master Niodu Jones Akpankpan for emerging as winner of the 2011 Spelling Bee Competition while other members of his Executive Council received consolation prizes.

The other members of the team are Master Kayode Ikumeyilo from OndoState as Deputy Governor, Mr John Okorie from Imo State as Commissioner for Information and Strategy, Master Sola Bello from Osun State (Environment), Miss Toyin Adeyelu from Ondo State (Education), Master Temilade Adesanya from Ogun State as Transport Commissioner.

The event was also witnessed by parents of the One Day Governor and the other winners in the Competition.